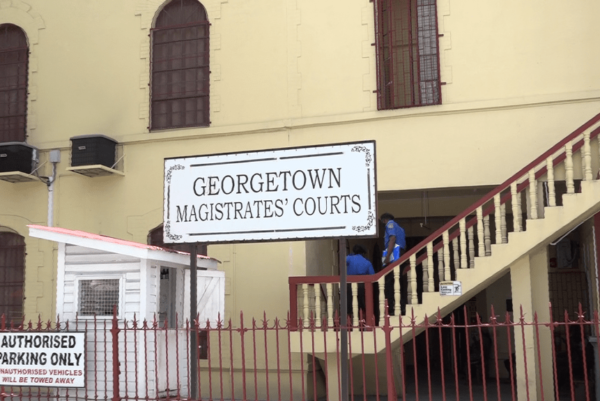 Senior Magistrate Leron Daly on Monday sentenced a man to two years behind bars for grabbing a City Policewoman’s breast. The custodial sentence was imposed on 33-year-old Jason Yarris of Lot 31 Bent Street, Werk-en-Rust, Georgetown.  After a trial, Yarris was found guilty on a sexual assault charge.

On April 2021, Yarris pleaded not guilty to the charge which stated that on December 7, 2020, at Water Street, Georgetown,  he sexually assaulted a woman by grabbing her breast without her consent.

At the time of the incident, the victim was acting in the execution of her duties. According to reports, on the day in question, the woman was at Water Street, Georgetown carrying out her duty when Yarris walked up to her and grabbed her breast, and walked away.

The matter was reported and Yarris was arrested and charged for the offense.

On March 5, 2021, Yarris appeared before Chief Magistrate Ann McLennan on a similar charge. He had pleaded not guilty to the charge which stated that on September 24, 2020, at Benn Street, Werk-en-Rust, Georgetown, he sexually assaulted a postwoman by touching her buttocks without her consent.

Facts presented by the prosecutor stated that on the day in question, at around 08:45 hrs, the woman who was riding her bicycle, was delivering mail in the vicinity of Bent and John Streets, Werk-en-rust, Georgetown. The court heard that when the woman entered 31 Benn Street, Yarris approached her from behind and pulled her bicycle by the seat as if he wanted to take it away.

The woman then pulled away from her bicycle and Yarris grabbed her buttocks and walked away. The woman then continued delivering her mail and while exiting the yard, Yarris who was standing at the entrance stretched out his hands in an attempt to grab her breast.

The woman being fearful began to shout and neighbours came to her rescue. The woman then completed her mail delivery and reported the matter to the Police station. Yarris was arrested and charged. This matter is still ongoing at the Georgetown Magistrates’ Courts.