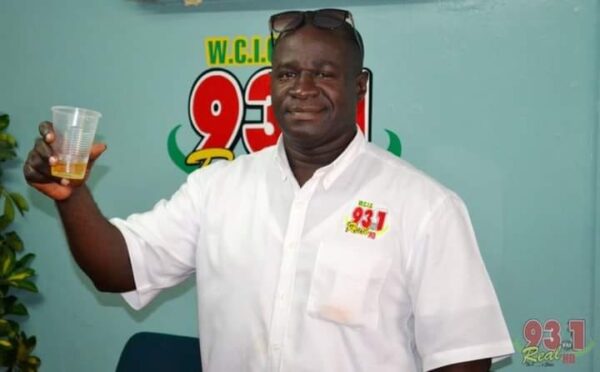 Confusion reigned on Tuesday morning as information suggested that popular businessman Maxwell Thom had passed away from COVID-19 while a patient at the Ocean View Hospital. The station and business that he owned, posted a statement confirming Thom’s passing, there was even an announcement on the radio station he owned. 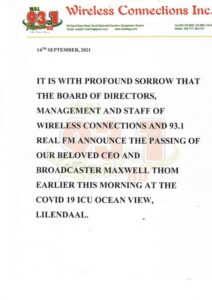 Following a flurry of news reports of Thom’s passing, there was information from the Hospital to suggest that he was still alive. The information was reportedly from a medical personnel from the facility. This added to the conflicting reports.

When contacted Minister of Health Dr Frank at 11:47am said that he was informed that Thom was alive.
But his father Hapworth Thom in a brief telephone call related that “someone” called Thom’s wife and told her that he had passed away but the family too was hearing conflicting reports about his death.

By noon today, there was confirmation that Thom indeed passed away. We were told that Thom was doing well up to this morning and even was up exercising. Thom reportedly developed issues breathing we were told.

This latest mix up speaks to the lack of confirmation of information from the Ocean View Hospital and the lack of a proper communication channel for reporting deaths to the families. Who could have called the family to report that Thom died and what is the system for reporting such deaths to loved ones, why was the family told that he had died and the medical personnel was telling persons that he had not, are some of the questions that the Ministry of Health should answer.

Additionally, we respect that persons’ medical information is private but special attention on ensuring the correct information is made public and communication channels are opened for proper confirmation of vital information. We also respect the right of the families being informed first as a matter of protocol but a lot is left to be desired.