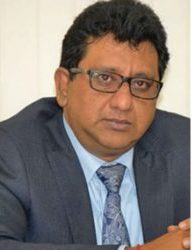 The Attorney General made this disclosure this morning when Justice George held another hearing in an application filed by Senior Superintendent of Police Calvin Brutus who is challenging the promotions.

Among other things, Brutus is asking the court to grant an Order of Certiorari quashing, as unlawful the promotions of several of his colleagues  made by the PSC.

Now, several other senior Police ranks have been added as parties to Brutus’ action.

Also, Manny Bacchus has since moved to the court blocking the promotions of Cristol Robinson, Marcy Washington, Hugh Winter, Walter Stanton and one other officer.

Though the Chairman of the PSC, Assistant Commissioner of Police, Paul Slowe is in Bangladesh performing duties with the West Indies Cricket Board, he has been meeting with Nandlall and the Police officers via Zoom.

The next meeting is scheduled for this  Friday. It is expected that these meetings will continue until a resolution is met.

The Attorney General will report on the outcomes of the meetings to the Chief Justice on February 05, 2020.

By Article 212 of the Constitution, the PSC has the power to promote police ranks above the rank of Inspector.

It also has the authority to exercise disciplinary control over ranks holding or acting in such offices.

He claims that he is being bypassed for promotion owing to frivolous allegations of indiscipline levelled against him for which he has not been given a chance to defend himself.

According to him, it has been a practice for the PSC not to promote Police officers with pending disciplinary complaints regardless of the nature or seriousness of such complaints.

However, he pointed out that although a number of officers have pending matters, they were still being tipped for promotion by the PSC.

“It was an abuse of power and/or an improper exercise of the powers for the PSC to ignore the recommendations of the Commissioner of Police and its own established practice.

The difference in treatment of ranks who found themselves in the same grouping was substantially and fundamentally unfair, unreasonable, unequal, and discriminatory,” Brutus argues.

Brutus said that he is better qualified than his colleagues who were being tipped to be promoted over him. In court documents seen by this publication, Brutus stated that he joined the Police Force in  March 1999.

He said he is the holder of a Bachelor’s Degree in Public Management and Bachelor of Laws Degree. He added that he is also the holder of a Master’s Degree in Business Administration, a Doctorate in Organisational Development and is currently pursuing his Legal Education Certificate at the High Wooding Law School in Trinidad.

Moreover, Brutus stated that he has also completed several technical programmes with the Police Force.

In the meantime, Justice George has granted a conservatory order halting the promotions until she pronounces on the matter, or until a resolution favourable to all parties is met.

The aggrieved officers have vowed to go all the way to the CCJ if there is no local outcome in the matter that is favourable to them.