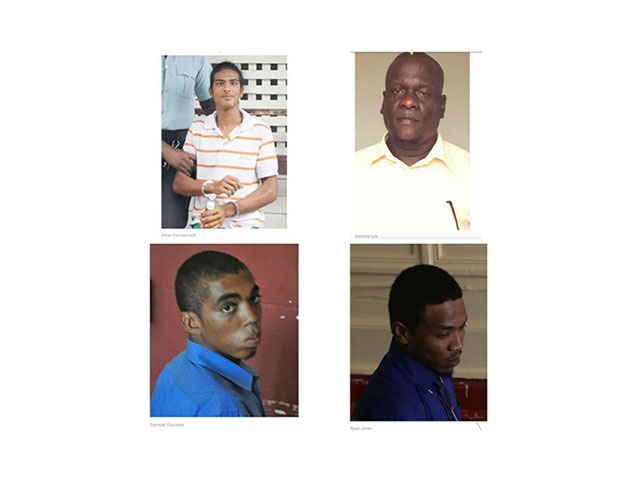 The father of Ryan Jones, one of the four men who escaped from the Mazaruni Prison, was today charged and remanded to prison for knowingly harbouring his son and three other wanted fugitives.

He was slapped with four charges of harbouring wanted fugitives.

The charge against Ralph Jones stated that on February 16, 2021, at 114 Fourth Avenue Bartica, he well knowing that Imran Ramsaywack, Samuel Gouveia, Ryan Jones, and Kenrick Lyte, four men being convicted prisoners at Mazaruni Prison had escaped from the said prison, he on the said date received, comforted, harboured, and maintained them.

He was not required to plead to the indictable charges after they were read to him. The man was represented by attorney-at-law Adrian Thompson.

The lawyer in an attempt to secure bail for his client told the court that his client’s son showed up at his home with the other 3 convicts and demanded food, clothing and money.

The lawyer added that his client was fearful for his life and him not helping the escapees could have caused him his death.

The Magistrate after listening to the lawyer, remanded Jones to prison until March 5, 2021.

According to information, the elder Jones told officers that his son contacted him via phone following his escape.

All four of the escapees showed up at his house where he provided each of them with a change of clothing. He in turn collected the clothes that they were wearing and dumped them in an alleyway aback his house in Fourth Avenue Bartica.

Ranks were able to recover a bag with clothing, footwear, deodorant, topes, pillow, and pillow-cases, along with a bottle of Red Star rub, a toothbrush, and a food bowl.

The four convicted prisoners broke out of the Mazaruni Prison located on the Essequibo River last Monday at about 7:15 hrs.

A manhunt is underway to recapture them. The men would have been serving either life or long sentences for varying crimes, including murder and manslaughter.

Kenrick Lyte was also sentenced to death for the murder of pensioner Osmond Fiedtkou.
The men remain on the run.