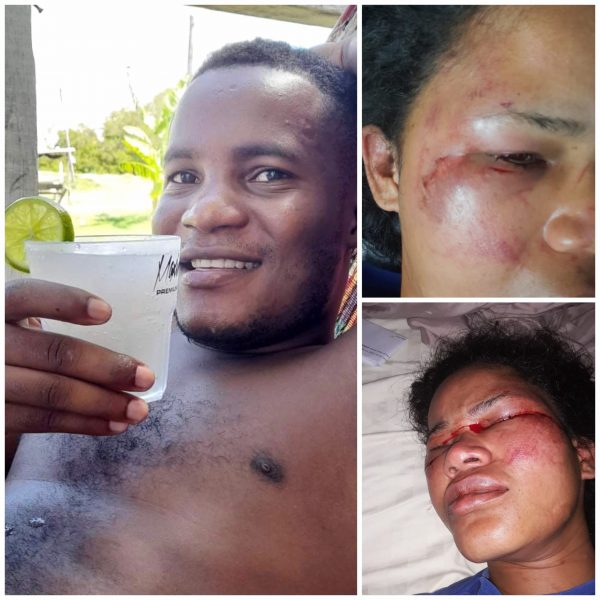 Twenty Nine year Old Lavina Williams, a mother of two children ages 4 and 11, almost lost her life at the hands of a man she has been sharing a relationship with for more than one year. Last week Thursday, Williams and her partner, Seresttee Brittlebank went to a birthday celebration and before they left the event, she became the subject of a battering.

In an exclusive interview with BIG Smith News Watch at her Lot C-25 Coldigen Crown Dam, East Coast Demerara home on Tuesday, Williams recalled that as they were about to leave the event, she grilled a friend of Brittlebank about calling him out of his home late at nights under the pretext that he needed to be at the station when in fact the arrangement is usually to have him meet with a woman who lives behind the police station.

Brittlebank who overheard the conversation between his colleague and Williams became engaged and accused Williams of embarrassing him in front of his friends. He then grabbed her and began slapping and cuffing her about her body. The beating started at the Chico Ram Gas Station at Coldigen where the party was being held and ended at their home a short distance away.

She again got blacked out and regained consciousness while the vehicle was turning into their driveway. As she regained consciousness, the beating again started and continued until she managed to slip out of the vehicle went to her back step where she attempted to go into the house, there another round of blows started and she blacked out once more.

The woman said after she regained consciousness she managed to scale the fence and went over by her neighbor for help but by then, Brittlebank who was inside their house emerged and came looking for her again. The neighbor attempted to intervene but the abusive policeman said that everything was ok and the neighbor returned to his home.

He [Brittlebank] took her to the back of the house and began beating her again and she for the fourth time passed out. When she woke up back, Brittlebank was kicking her in her head, back and belly. He picked up a shovel and last her to her side and when he raised it again, she held onto his feet and pleaded with him not to kill her.

“I scramble onto his foot and said please don’t do this I have two children to live for, you said you love me why you doing this to me and he said you playing a Who%e and he started kicking and stomping me and said everting gon done tonight… same time I screaming for my daughter and she opened the door and I told her to call granny, call uncle and call 911.. he then scramble me and choke me and I got blacked out again (for the firth time)” Livina Williams recalled to BIG Smith News Watch.

Williams explained that, when she regained consciousness, she found herself on her bed and Brittlebank was putting clothes on her. She again called out to her daughter to call 911 and bring the phone to her which the child did. She then related the matter to the operator and a patrol responded promptly but Brittlebank left before the police arrived.

The police escorted the woman’s children to their grandmother and then took Williams to the hospital as she was bleeding badly from her nose, ears and eyes while she sustained lacerations to other parts of the body. She said when he cried, it was blood that was coming out of her eyes rather than teardrops.

That rendered her visionless temporarily, however she explained that at the hospital she could hear Brittlebank’s voice and she asked her mother if he was there and the mother responded in the positive.

Shortly after, the doctor came to her bedside and instructed that only one person should be at a patient’s bedside. When questioned by the doctor on how she got her injuries, the woman told the doctor that the guy who was just at her bedside was the one who inflicted the wounds on her. Williams said the doctor got annoyed and went and look for Brittlebank and ordered him to stay away from her patient and not to come anywhere close to the accident and emergency unit.

“If it was not for my daughter opening that door, I think all now I would have at Jerrick laying down waiting for my funeral.” Williams said.

The woman said it was not the first time she was beaten by Brittlebank. According to her, in that instant, Brittlebank’s mother called her and asked her to give her son a second chance as that is not the son she raised. She told Williams that should he hit her again, she the mother will personally hand him over to the police. Williams then dropped that matter against Brittlebank.

It however turned out that when Brittlebank again battered Williams and she called his mother, the woman reportedly told her that she does not have any time with the two and that they should sort out their issues.

Brittlebank is presently on the run but has been texting Williams and asking her not to damage his image and character.