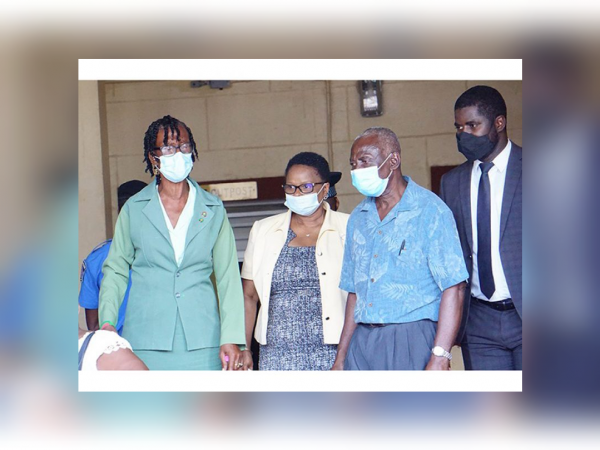 This means that they will be tried in the Magistrates’ Courts. Prominent Attorney-at-law Nigel Hughes who is among the lawyers representing Mingo, Lawrence, and Joseph had requested that the charges against his client remain indictable. He had made submissions in this regard.

This would have required the Chief Magistrate to conduct a Preliminary Inquiry (PI) to determine whether there is sufficient evidence for them to stand trial before a judge and jury at the High Court. The Chief Magistrate has however overruled Hughes’ submissions.

In light of the Chief Magistrate’s ruling, Mingo, Lawrence, and Joseph have pleaded not guilty to the charges. They have been released on monetary bail. The trio will return to court on June 11, 2021, which is fixed for full disclosure of statements.

Thereafter, the Chief Magistrate will set a date for the commencement of their trial.

One month after the PPP/C Government took office, the three were hauled before the courts in relation to the events that unfolded after the close of polls on March 2, 2020.

It is alleged that on March 5, 2020, with intent to defraud, Lawrence and Mingo uttered a certain document, that is to say, a report purporting to be a true declaration of all votes cast in District Four for the March 2, 2020, general and regional elections knowing that the report was forged.

It was further alleged that Mingo and Joseph on March 13, 2020, uttered a forged document purporting to be a true report of all votes cast in the March 2, 2020, general and regional elections knowing that the report was forged.

It is also alleged that on March 13, 2020, Joseph conspired with Mingo and others to declare a fraudulent count of votes for District Four. They have all been released on monetary bail pending the hearing and determination of their cases.

On February 11, 2021, Senior Magistrate Leron Daly ruled that she will be conducting a PI into the two misconduct in public office charges laid against Deputy Chief Elections Officer (DCEO), Roxanne Myers.

The charges against Myers states that between March 4 and March 14, 2020, in Georgetown, while being a public officer, she wilfully misconducted herself together with Mingo and others, to declare a fraudulent account of votes for the General and Regional Elections that amounted to a breach of the public’s trust without any reasonable excuse or justification.

Myers has been released on $300,000 bail. Special Prosecutor Ganesh Hira has since given the Magistrate notice of his intention to appeal her ruling.

Meanwhile, Chief Elections Officer, Keith Lowenfield is also facing misconduct in public office charges. Lowenfield is accused of attempting to undermine the will of the Guyanese people after he repeatedly refused to submit the verified results from the national recount of all ballots to GECOM Chairperson, retired Judge Claudette Singh for a final declaration. He has been charged with misconduct in public office.

According to Lowenfield’s report, the then caretaker APNU/AFC Coalition gained 171,825 votes and the PPP/C 166,343 votes. But how he arrived at these figures is a mystery since the national recount of all ballots which was supervised by a high-level team from CARICOM revealed that the PPP/C won the elections having obtained 233,336 votes while the coalition garnered 217,920.

The recount also showed that Mingo inflated the votes for Region Four- Guyana’s largest voting district in favour of the APNU/AFC.

The DPP has since hired a team of Special Prosecutors consisting of Attorneys-at-law  to prosecute these electoral fraud matters on behalf of the State.