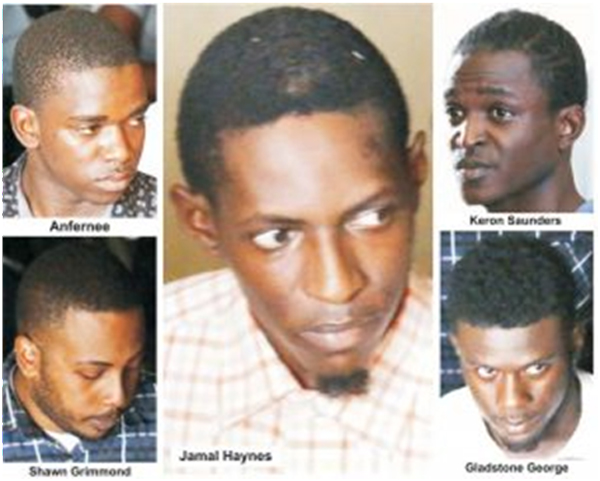 After almost four years of being on trial, the four men accused of staging a botched robbery at Republic Bank’s Water Street, Georgetown branch will know their fate come April 14, 2021. This is the day Senior Magistrate Leron Daly has set to make a ruling on the no-case submissions laid over by the men’s lawyers.

The men all denied the charge which stated that on July 4, 2017, while being armed with guns, they attempted to rob Republic Bank’s Water Street, Georgetown branch. They are currently out on $500,000 bail each pending the trial.

The attempted robbery left 25-year-old Agronomist, Elton Wray dead. Wray was killed during an exchange of gunfire between his alleged accomplices, police, and guards attached to the Professional Guard Service who were stationed at the bank.

According to reports, the men had planned on getting their hands on the night’s deposits, since it was a three-day weekend and companies would have deposited millions of dollars in cash into the bank.

When the matter was first called in 2017, the court heard that Jamal Haynes, a Republic Bank employee at the time and Saunders implicated the others in the botched robbery and outlined the roles each of them played.

It was reported that Constable Blackman supplied Haynes, Saunders, and Wray with the guns. Blackman transported the men to the location in his motor car. Haynes was said to have visited Grimmond’s home days before giving him a cellular phone to contact him and the others.

Haynes pleaded guilty to the charges of attempted robbery under-arms, illegal firearm and ammunition possession, and unlawful restraining on his first court appearance back in 2017. He was sentenced to a total of six years’ imprisonment by Chief Magistrate Ann McLennan.