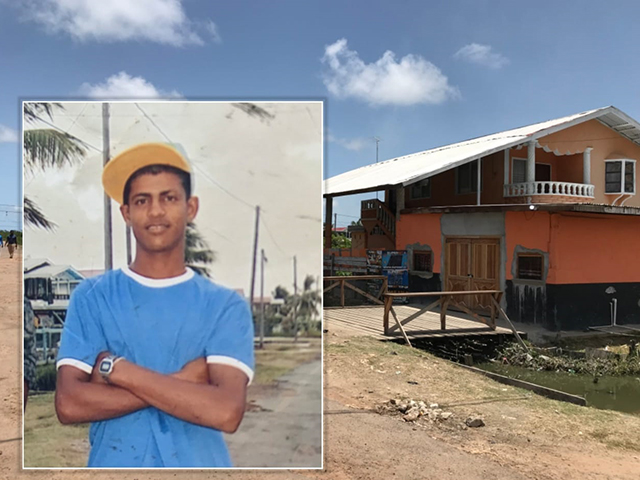 DEAD:John Alexander Yhap and the Superbet shop where he was stabbed

Twenty-four-year-old John Alexander Yhap, a fisherman, of Lot 84 Kilcoy Village, Corentyne, was viciously stabbed to death on Monday evening, reportedly by a man who resides in the same street as he did, and who had wounded him several days ago.

According to information received, Yhap and the suspect (also said to be a fisherman) were at odds with each other for quite some time, and it ended with the fatal knifing of Yhap. The incident occurred around 19:00hrs. The men were involved in an argument near to a Superbet shop in the area, following which a scuffle ensued between the two, and it was then that the suspect pulled out a knife and dealt John several stabs about his body.

The man’s wife, 22-year-old Mineisha Chandralall, said her husband and the suspect were recently involved in a confrontation, and the said individual had slashed him on the throat. As a result of that incident, Yhap not only ended up with at least four stitches on his throat, but was also threatened by the suspect that it would not end like that, and more would be done to him.
Chandralall lamented that just two weeks after burying her mother, she now has to make another funeral arrangement following the murder of her husband.

The grieving woman stated that she cannot process the sudden death of her husband as he was the only one there comforting her since she lost her mother with whom she was very close.
“Losing my mom was very hard, and to now lose my husband it feels as though my world is crumbling. I have no one. My dad died in 2008, and now within the space of one month I’ve lost my mom and husband”

She is now left with her two kids ages five and two to maintain. Her husband was the sole breadwinner of the family.
She reflected that last week for her mother’s funeral, her husband had asked a young lady from the village to braid his hair. The Big Smith News Watch was told that the suspect, on many occasions, alleged that he ‘likes’ the said young woman, and after learning that Yhap had asked her to braid his hair, he [the suspect] became furious and confronted Yhap, and told him that he did not appreciate him speaking with the young woman. This, however, became an issue between the men over the past week, and seemingly as a consequence of the apparent jealousy, Yhap met his demise.

“Long now he get his eye on my husband, and just because my mom died, and he [her husband] asked the girl to plait his hair to go funeral, that boy got a problem. So, he [the suspect] said that because the girl plait my husband hair, that is the problem, because he come and give me complaint that he don’t want my husband to go plait his hair by the girl, and I tell him that my husband is not a person like that, and he would not do anything.”

The young girl, who is just 14 years old, said that she does not know why the suspect is “spreading” her name that he is sharing a relationship with her, and she also stated it is not the first time that she is hearing from persons that the man is going around telling everyone that he likes her.

Yhap was expected to leave for sea to work on Monday evening but could not, as the fishing seine was not in working condition. He only returned from sea last Saturday. His wife said that he would usually fish off Guyana’s shore for about 2-3 days and that was how they survived.