Empower Guyana on Wednesday last hosted a special caucus for discourse and presentations to be done on conversations surrounding the Guyana/Venezuela Border conflict.

Founder and Chief Facilitator of Empower Guyana Consultancy Amar Panday opened the discussion which was held at the City Hall by detailing the course of events leading up to the Arbitral Award presented to Guyana in 1899. This award essentially gave Guyana the right to possess and make use of the entire Essequibo county, which Venezuela was placing a territorial claim on.

After Panday’s detailed presentation of the overview of the Award, renowned writer and researcher Ronald Austin Jr. took up the mantle and presented a detailed explanation of the events linked to Venezuela’s repudiation of the 1899 Award.

Austin highlighted that one of the things Guyana needs to do now more than ever is raise the Guyanese population’s awareness of this issue as Venezuela constantly does by attempting to push propaganda to their citizens. “I am of the view that we have got to find a way…to [enable] persons who ought to know more [about this issue],” he said.

The renowned writer and political commentator expressed his opinion that Venezuela will not cease in their attempts to capture and claim almost 70% of Guyana’s terrain as theirs. “…Based on my research, I don’t see any effort afoot where [Venezuela will] say ‘we should let this thing die’. Every piece of research suggests that this thing will go on and on,” Austin added.

During the question and answer segment, Austin explained the important role that the youth must play in order to sensitize not only themselves but the world about the issue at hand. Austin made reference to the large outcries that have been made in other parts of the world, such as the ‘ENDSARS Nigeria’ movement that caught the special attention of world-renowned celebrities like Rihanna and Beyonce. Austin said that the massive influence of social media platforms can be utilized to raise awareness about the border conflict, thus pressuring Venezuela to cease “bullying” Guyana. 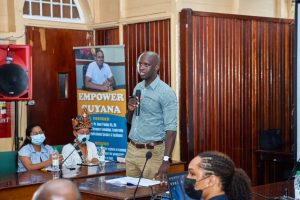 Amongst the events of the day was the unveiling of a special artistic piece that was created by two young and talented artists, depicting Guyana’s sovereignty and the Guyana’s united front against against external aggression. This piece was designed by Ransford Simon and Bevan Allicock.

Headlining the afternoon’s event was Special Advisor on Borders in the Ministry of Foreign Affairs, Carl Greenidge, who pellucidly highlighted the recent events surrounding the border controversy and what the next steps will be for Guyana. Greenidge noted that there are multiple lawyers who are actively involved in representing Guyana at the level of the International Court of Justice.  “We have retained international lawyers of the highest standing who have spent a lot of time in the court and have worked on some of the most famous cases known,” Greenidge noted.

In a post conference interview, the long-standing Foreign Affairs expert has noted that the ICJ is expected to have a hearing in regards to the conflict that stands before the court on February 26. “The hearing will be held on Friday as planned and it is largely a formality in [court proceedings],” he said.

Greenidge highlighted, however, that this hearing may not occur as it is also dependent on Venezuela’s participation in the case. “It may not be on Friday because depending upon whether or not Venezuela participates, [the Court] may want to reflect, communicate then come back before naming when Guyana will have to present,” he explained.

Greenidge in his concluding statements expressed his gratitude to the Empower Guyana for its role in facilitating such an event that provided for the enabling of the youth in conversations and discussions about the border conflict. “I am happy for the opportunity to see the young people in action in their sharing with us their ideas,” he said.