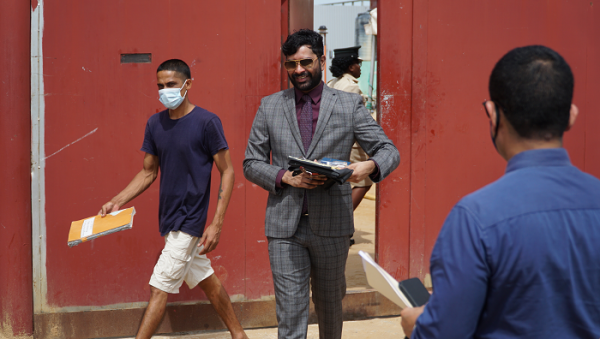 Marcus Bisram is arguing that the Guyana Court of Appeal erred on several grounds in finding that the Director of Public Prosecutions (DPP) Shalimar Ali-Hack, SC, acted lawfully when she directed that he be committed to stand trial for the 2016 murder of Berbice carpenter Faiyaz Narinedatt.

This was outlined in a Notice of Appeal filed by his lawyers, Dharshan Ramdhanie, QC, Arudranauth Gossai, Sanjeev Datadin, and Dexter Todd at the Caribbean Court of Justice (CCJ).

In court documents seen by this publication, the lawyers, among other things contend the following:

(1). The Court of Appeal erred when it held that the [Director of Public Prosecutions] in directing a Magistrate to commit an accused person under Section 72(2) of the Criminal Law (Procedure) Act Cap 10.01 was not an act in breach of the constitutional separation of powers doctrine and specifically Article 122 A of the Constitution of Guyana and that further, it was not an act constituting an improper interference with the independence of the judiciary.

(2). The Court of Appeal erred in failing to recognise that as a court in judicial review proceedings, it was duty-bound to assess and determine whether the Learned Magistrate’s decision and equally the decision of the Learned High Court Judge was respectively reasonable and rational when Her Worship and the Learned Trial Judge ruled that the evidence against the Appellant was insufficient to commit him to stand trial.

(3). The Court of Appeal equally erred in failing to recognise that as a court in judicial review proceedings, it was duty-bound to assess and determine whether the Learned Director of Public Prosecution’s decision, was reasonable and rational when the Director used the same evidence against the Appellant to form a belief that the evidence was sufficient to commit him to stand trial.

(4). The Court of Appeal erred when it held that section 72(2) of the Criminal Law (Procedure) Act Cap 10.01 was not unconstitutional, as being saved by Article 152 of the Guyana Constitution as a pre-existing law.

As such, Bisram’s lawyers are asking the CCJ to set aside the ruling of the Court of Appeal. They are further asking the court to declare that Section 72 of the Criminal Law (Procedure) Act is unconstitutional in view of Article 122 A (1) of the Constitution.

The Guyana Court of Appeal rendered its ruling on May 31, 2021. Almost two weeks later, Bisram applied for and was granted special leave by the CCJ to file an appeal against the ruling of the lower court. The CCJ has since suspended the Appeal Court’s ruling until it hears and determines the appeal.

The CCJ has also ordered the DPP not to take steps to arrest Bisram. He was further ordered to remain in Guyana until the matter concludes. He was instructed to lodge his passport with the Registrar of the High Court. Bisram was also ordered by the regional court to report to the Police on specified dates. Bisram remains a free man until the CCJ renders its ruling.

One year ago, in June 2020, High Court Judge Simone Morris-Ramlall granted an order of certiorari quashing a directive by the DPP to Magistrate Renita Singh for Bisram to be committed to stand trial for Narinedatt’s murder at the High Court in Berbice.

At the time, Justice Morris-Ramlall said that at the conclusion of a Preliminary Inquiry (PI), the evidence led by the prosecution against Bisram was insufficient, or, in other words, not of the quality that a reasonable jury properly directed could safely convict on it.

The Judge had noted that the state or extent of the evidence is a relevant factor that should have been taken into account by the DPP in arriving at her decisions.

But in overturning the decision of Justice Ramlall, the Court of Appeal led by Chancellor of the Judiciary Justice Yonette Cummings-Edwards held, “We are of the view that the committal proceedings by the magistrate and the direction by the [DPP] would not have been invalid.”

Justice Cummings-Edwards underscored that the issues raised in this case would be better ventilated at the trial court before a jury.

The DPP has always maintained that her directive for Bisram to be committed to stand a murder trial is lawful, as there is sufficient evidence against him, for which a reasonable jury if properly directed, could safely convict.

Bisram’s lawyers, on the other hand, maintain that the directive from the DPP to the Magistrate, to commit Bisram to stand trial was unlawful since it offends the separation of powers doctrine. They argued that the determination of whether a prima facie case was made out is a judicial process that has to be determined by the Magistrate and not the DPP.

Bisram was charged with the 2016 murder of Faiyaz Narinedatt, a young father of two of Number 72 Village Corentyne, Berbice. It was reported that on the night of October 31, 2016, Narinedatt attended a party Bisram hosted at his home.

It is alleged that Bisram made sexual advances to Narinedatt. It was reported that after the carpenter rejected Bisram’s advances by slapping him, Bisram ordered some men to kill him.

Narinedatt’s body was later found on the roadway. Five other men are currently on remand awaiting trial at the High Court in Berbice for Narinedatt’s murder.