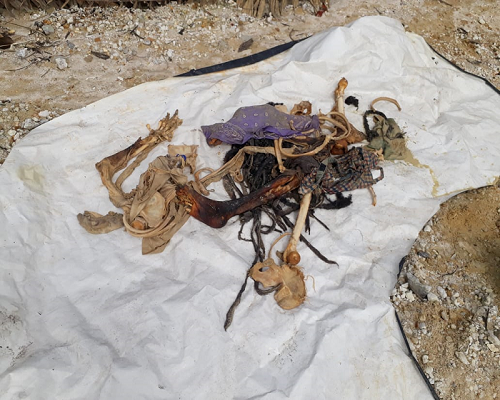 The headless remains of 60 Year old Philbert Fraser, a small scale miner of 56 Third Avenue Bartica, were found by a stranger at False Stop Arumi, Cuyuni Mazaruni, inside his mining camp three days after he would have celebrated his 61st birth anniversary.

His 28 year old daughter Whitney Fraser told BIG Smith Crime Watch in an interview that the family needs answers in order to have closure.

“On February 9, I got a call at 11, a male spoke to me and say my father; something wrong with him in the Backdam I just saw some remains of him by the pit and I asked him about the natty (dreadlocks) and he said yes”

She then walked to the Bartica Police Station where she repeated what the caller said to her and then requested of the police there, ranks to accompany her to the crime scene but was told none were available to go with her.

“I walked out the station and they called me back on my phone and sad that they have a detective and a police who can go with me and if the Cruiser is ready and I said yes. I chartered a cruiser to False Stop Arumi for $45,000 (Forty Five Thousand Dollars)”

“We found his remains and bones and we did not find the head. The remains were close to the pit the detectives were told that they need to get the head and they said no one can’t go into the pit and that they have to come out with whatever remains they have and the next morning they will return so my aunt ask who paying for the return and they said they will stand the expense”Whitney explained.

However the following day, there was a shift in position by the detectives who prepped the remains to be dispatched to the city minus the head, something that did not sit well with the relatives.

“The detective said that all the parts in the bag that he bring out so I said how all the parts in there and the head is not there and you preparing to send that to town? I said that I was there in the Backdam and I said you ain’t find the head and I said open the bag let me see if the head is in there and he said I should come back till after 11 and we went to the commander. While we were going to the commander, the detective calling us back but we did not go back into the interior. They also asked for oil for the excavator, fuel and men to leave there and so on and when we go in there they ain’t had to use nothing, the head was in the middle of the pit floating”Whitney explained.

When we visit the Fraser’s home in Bartica, a black flag fluttered on a pole alongside the Rastafarian standard (flag)

Whitney said the flag will remain flying to represent the loss of her father and until the family gets closure. By closure, they mean the perpetrators being arrested and placed before the courts.

The family reportedly received information on who the possible suspects are and the general areas they reside. It is believe that the businessman was murdered by his workers who were identified as Indigenous persons who hails from Essequibo, North West District and Kwakwani.

BIG Smith Crime Watch was told that certificates, photographs and other documents suspected to property of the suspects were retrieved from the camp site and handed over to the police.

The police we were told, indicated to relatives that they went in search of the men but came up empty handed.

Fraser is believed to have been killed just after washing down his production. The young lady related that her father’s camp did not have security and that he was a not a licence firearm holder.

The dead man’s daughter said that they also met with Commissioner of Police Leslie James but they are not sure what is happening with the investigation.