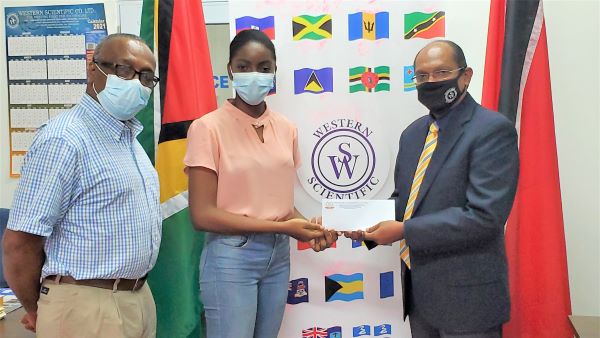 The teen recently reached out for the public’s assistance to be able to pursue higher education after excelling at the Caribbean Advanced Proficiency Examination (CAPE).

Hamilton with assistance from her mentor Patrick Stephens had requested assistance via letter to WSCL’s parent office in Trinidad.

The letter caught the attention of the WSCL’S President Mr. Edwin Mackoon, who after discussions with his Board of Directors, approved the funds which will cover the student’s tuition.

“I am deeply impressed by Ms. Hamilton’s tenacity as she persevered through immense hardship at a very young age and stayed true to her goal. In doing so, she not only focused on her own self-development but also attempted to help others become more aware of the field of green engineering and its usefulness in today’s world,” Mr Mackoon said.

“Green engineering is the future, particularly in the evolving societies of Guyana and Trinidad where oil discoveries create the need for appropriate technologies which
can further development whilst also protecting the environment. This safe future can only be built by our youth,” the Company’s President said.

The cheque was prepared and handed over by the company’s Regional Manager Richard Ramlal, at WSCL’s Lot 1 Rahaman Park, Houston, EBD office on June 10,
2021.

Hamilton, a former student of Queen’s College, will major in Civil and Green Engineering and minor in Communications at the University. “This contribution means the world. It feels like a signal from the future that my dream to go to Howard will indeed come through. For that, I am immensely grateful to Mr. Edwin Mackoon, Mr. Ramlal and the rest of the Western Scientific Company team for believing in me and getting me one step closer to achieving my dream job,” Hamilton said.

She is supported by her single mother, Carol Hamilton as well as several well- wishers who have gone above and beyond.

Western Scientific Co. Limited, is a Trinidad based company with chapters throughout the Caribbean and most recently Guyana. With over Thirty-six years of existence, the company specialises in the Supply, Installation, Commissioning and Training of Scientific, Clinical &amp; Medical Laboratory Equipment and Supplies.

Currently, the distribution network spans more than 22 countries and over 300 small to medium clients and 150 large clients.