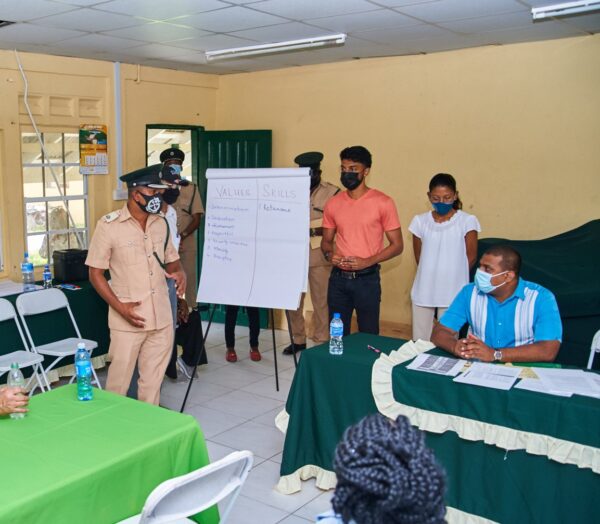 The prisoners housed at the Lusignan Prison are now recipients of monthly training sessions focused on personal development and conflict resolution skills, which has ‘significantly’ reduced violence among the prisoners.

Empower Guyana Consultancy (EGC) has taken up the role of organizing and facilitating these sessions.

Founder and Chief Executive Officer of the organization, Amar Panday in a brief interview with the Big Smith News Watch explained the purpose and aim of the workshops. Panday said that the sessions, which will be held on the last Friday of every month, will focus on creating more of a restorative justice system. “The goal is to expose the inmates to ideas and concepts relating to personal development and leadership [so] that they can return to their communities as reformed, rehabilitated citizens,” Panday said.

Senior Superintendent (ag) of the Guyana Prison Service (GPS) and Officer-in-Charge of the Lusignan Prison, Deoraj Gyandat, lauded the Founder of the organization for the work he has been doing for inmates across the country. “Over the years, {Panday] has been supportive of the Guyana Prison Service at different locations, giving voluntary service to train inmates,” Gyandat said.

The senior rank of the GPS highlighted that the prisoners who are being targeted by this initiative will include inmates who are currently incarcerated for petty crimes, as well as those who are imprisoned for capital offences. “We are looking to target a mixture of prisoners…prisoners who are serving as much as 50 years imprisonment and as low as 1-year sentences,” he explained.  “The overarching objective of this training is to have a positive change of prisoner behaviour and it is our hope that this change transcends into society when they are reintegrated,” Gyandat said.

When asked whether the GPS has already seen a change in the behaviour of prisoners, Gyandat noted that these workshops, coupled with other necessary procedures that were implemented, have drastically decreased the amount of violence reported amongst prisoners. “Our statistics would have shown that these workshops…[including] other methods of management…would have resulted in a significant reduction in prisoner-to-prisoner violence,” Gyandat detailed.

The Officer-in-Charge went on to say that the training sessions have brought about a desire for some of the prisoners to step up and be leaders, and to maintain law and order within the prison walls. “We see more leaders rising up…they are more empowered and equipped with simple tools to address conflicts while in prison. So, I can say positively that this program by Empower Guyana has been working,” Gyandatt assured.

The Senior Superintendent expressed his commitment to continue the capacity building sessions and to even extend the programs to facilitate prison officers.