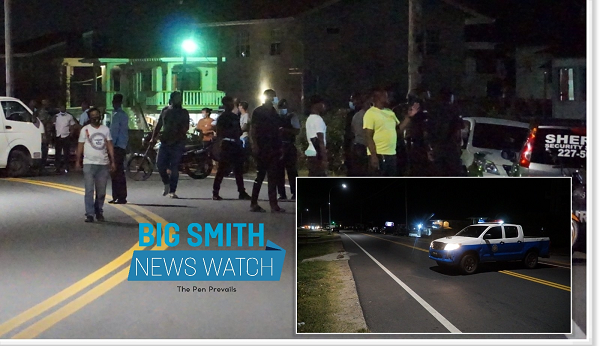 The scene outside the supermarket on Tuesday night

The son of a retired, controversial Deputy Commissioner of Police has been detained by the police for questioning in relation to the invasion of a supermarket on the East Coast Demerara on Tuesday night, which has left one Chinese national nursing a gunshot wound to the leg.

BIG Smith News Watch has been informed that the suspect, who is also being held on suspicion of being the mastermind of the robbery, was working with the Sheriff Security Guard Service and was on duty on Tuesday night when he was relieved of a shotgun.

The police last evening indicated that the building was swept after it was reported that one of the bandits was still trapped inside, but no one was found.

Police sources have confirmed that while the young man is said to be from the general area where the supermarket is actually located, he is no stranger to law enforcement.

In fact, this publication was told that he was once charged and placed before the court for robbery under arms, but that matter was dismissed for want of prosecution, after the victim did not follow through with offering evidence against the man in court.

Questioned on how he was able to secure a precept to carry a firearm, having had a brush with the law on armed robbery, police sources clarified that precepts (permission to carry arms and ammunition) are issued following background checks which are carried out on those seeking to have precepts.

A precept is usually issued to persons who carry arms and ammunition on behalf of someone else, in this case a security company or someone who hires a personal bodyguard, etc.

BIG Smith News Watch was told that the son of the former Deputy Commissioner might have passed his background checks, since granting precepts are done and approved once the background checks prove that the applicant was never convicted of a crime.

With the victim not offering evidence in the court against the young man over the alleged robbery under arms and the matter being thrown out, it simply means that no conviction was recorded for the accused, hence his ability to pass his background checks.