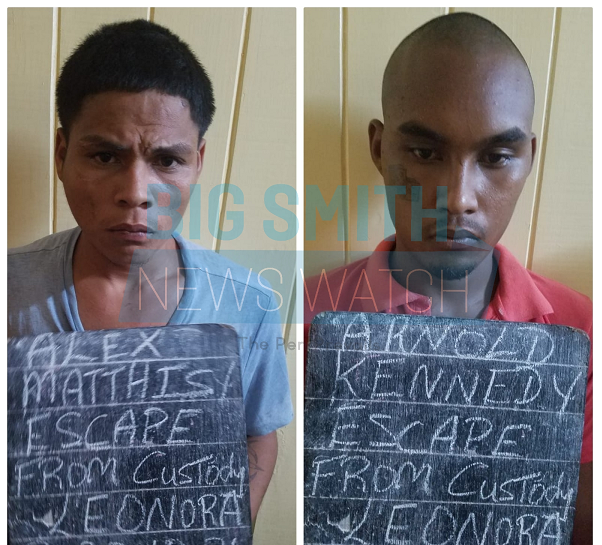 Director of Prisons Gladwin Samuels confirmed the capture of the men this morning in a statement to the press where he thanked the public for their support on disclosing the location of the wanted men.

He said the recapture was due to tactical action by the members of the joint services and information received which resulted in the recapture.

“Back in custody are Alex Matthias and Arnold Kennedy. They were recaptured at Zeelugt public road East Bank Essequibo. The prisoners will aid in the ongoing investigation for the escape and they will also be processed for charges.” Samuels noted in his release.

Still at large is Mark Rafino for whom the joint services are continuing their search.

On Wednesday the police force in a statement noted that the prisoners jumped the south-eastern fence and fled into the surrounding area and that an intensive manhunt commenced and was on underway for them.

The police had also asked the public to assist with any information they have in relation to the whereabouts of the fugitives.

The Lusignan Prison continues to suffer breakouts by prisoners and this practice has been going on ever since the establishment of the holding bay was established following the Camp Street fires which saw hundreds of prisoners being relocated to that location.

The holding bay is not as secure as the general prison building which itself suffer extensive damage during a fire in August which was set by inmates.