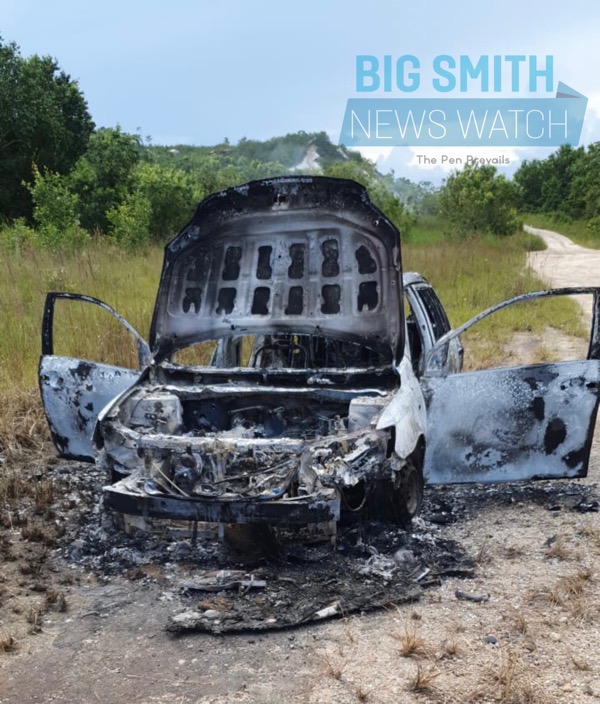 WHAT IS LEFT: Of the suspected ambush and getaway car in the shooting death and injury of two Georgetown youth in Linden

A car that is suspected to be the same one used in the ambush and murder of Delron McKenzie and the attempted murder of his friend Calvin Daly was on Sunday found burnt-out at the Blue Lake in Region 10.

Police sources indicated that the sliver grey Fielder Wagon was seen parked on the access road to the lake on Sunday morning as person where heading to the area.

What is left of the vehicle has since been lodged with the police even as investigations are ongoing.

Meanwhile as it relates to the shooting death and injury of the young-men, the police are still investigating.

The female who the men were reportedly in contact with has not yet been arrested by the police as as her identity is being looked into.

However sources in Georgetown has since confirmed that efforts are being made by the police to ascertain who the young men were in contact with and who was  in contact with them.

On Saturday night, the two were attacked and shot in an ambush style as they were reportedly receiving directions on the phone from a female to where they can find her.

The two Georgetown residents were ambushed by men in a car who opened fire on them with 9MM pistols before making good their escape.

Based on information the police received, the same car that ambushed the men was the same vehicle that the female reportedly sent to pick the men up and to take them to her location.

Delron was killed on the process of the attack while Calvin, both of LaPenitence in Georgetown was injured.

The investigations are ongoing.