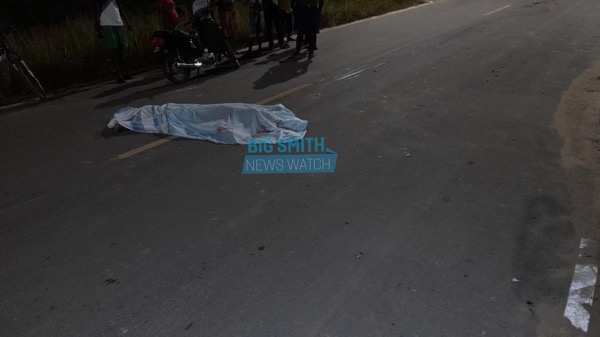 The body of Mohan at the accident scene on Saturday evening

A man who moments before his head was crushed by a speeding car PZZ 7322 , told family members and persons in the area that he wanted to die. He then went and lay down on a highway when a car drove over his head, crushing his skull in the process.

Mohan was killed on the spot at Farm New Road, otherwise known as the New Access road which links Mocha to Diamond.

When this publication visited the area on Saturday night, we were told by persons in the area that Mohan and his family worked whole day on a house the family is building in the Farm New Housing Scheme.

According to what we were told, after they were finish working for the day, the family and workmen began imbibing. Mohan however protested the fact that he was given High-Win to drink while others were consuming another brand of liquor.

The man then walked out from the street where the family is building their home and lay on the road after telling persons that he wanted to die and that he will kill himself.

Shortly after laying on the road in the path of oncoming traffic, a vehicle which was being driven by a 22 year old drove over his head before dragging him some distance away.

The young driver, Jaleel Henry; then drove straight to the Providence Police Station where he reported the accident to the police and explained that he drove away for security reasons.

A breathalyzer test was conducted on the driver and no trace of alcohol was detected in his breath. He remains in custody.