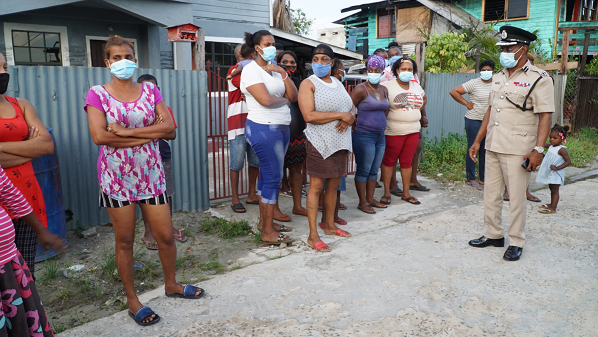 Assistant Commissioner Clifton Hicken led a team of police officers and junior ranks, on Tuesday, to Great Diamond, East Bank Demerara, where he distributed a number of hampers, and engaged with young people who are unemployed.

The visit was a follow-up to an earlier engagement in the area, where Hicken and businessman George Phillips distributed masks to the community, in an effort to reduce the spread of the coronavirus.

The earlier visit did see Hicken giving a charge to one of his officers to provide him with a list of young people from the community who have skills but are unemployed. This was done with a view of engaging agencies to ensure that gainful employment is provided to the young people.

On Tuesday when Hicken revisited the area, a number of Venezuelans and other persons who are living in the area aback of the Courts building were engaged and presented with hampers containing groceries, which are expected to last them for at least two weeks.

Hicken told the residents that his primary focus was not on providing them with handouts, but rather, he was more concerned in ensuring that the community becomes one where those who are employable are beneficially employed.

He stressed that unemployment brings added challenges for law enforcement, especially among young people, and it is in the interest of the Guyana Police Force to do all that is necessary and required to ensure that cohesion is built with communities, where its residents and inhabitants are not inclined to engage in activities which can land them on the wrong side of the law.