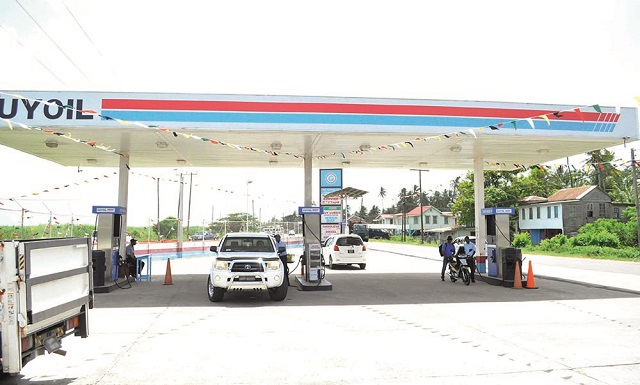 Guyoil workers on countrywide strike from todayWorkers from the Guyana Oil Company, the state owned and control gas stations have moved forward with a planned strike action with support from their union.

The workers who turned up for work this morning as normal have refused to commence active duties of pumping gas, servicing etc.

The strike action comes after talks between the management of the company and the Clerical & Commercial Workers’ Union (CCWU) breakdown over bonus and increase for workers.

President of the Union Sherwin Greeve told the press days ago that the company has embarked on a promotion where they are giving millions away to customers but zero for the staff of the company.

A proposal of an 8%increase based on appraisals for the year 2020 was touted and if that did not work out a 5% increase across the board was recommended to the oil company’s management by the union.

The company and the union have been in talks since February of this year but according to the Union President, when the government change, so too did the position of the oil company.

The strike action will hit affect several individuals and agencies as Guyoil has a running bill with a number of government agencies including the police force and other joint services groups for fuel for their vehicles which is credited and then charged to the agencies at the end of the month.

Several ministries and agencies also have this same arrangement.

Small scale business, minibus operators and taxi drivers also depend on Guyoil for it’s cheap fuel to carry out their day to day operations.