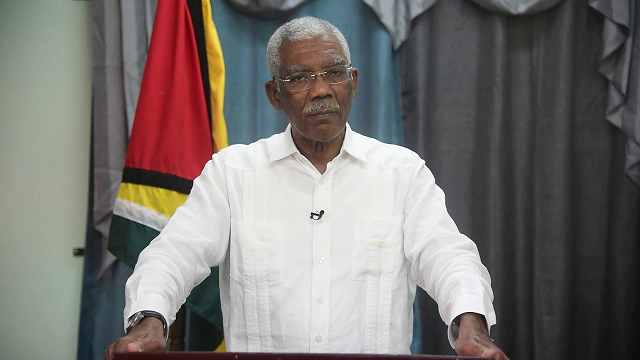 In a Statement of Claim filed by his lawyer Roysdale Forde, SC, Granger is also asking the High Court to award him exemplary and aggravated damages, interests, costs, and such further or other order it deems just.

The former President that during March 2020 to August 2020, Nascimento commenced and sustained a series of defamatory attacks on him through opinion pieces that were published in the daily newspapers.

Granger contends that the attacks were relentless and displayed a complete disregard for the truth.

The pieces written by Nascimento were in relation to the March 2020 General and Regional Elections and the events that unfolded thereafter.

According to Granger, the opinion pieces suggested that he was unfit to be President of Guyana, involved in criminal and illegal activities and practices, dishonest and deceitful, habitually hypocritical, a liar, of dubious credibility and honest, and of unsound mind.

Further, Granger claims that the pieces penned by Nascimento suggested that he was complicit in an obvious and determined decision of the APNU/AFC to remain in Government regardless of the expressed will of the people in the March 2, 2020, General and Regional Elections.

According to the former Head of State, during the election period, he made several public broadcasts to the nation in which he communicated to the nation, the Diplomatic Community, and Civil Society that:
“As President of Guyana and Leader of the Government, it is my policy that any declaration coming from the Chairman of GECOM will be accepted by the Government of Guyana.”

Granger said that the publications suggested that he encouraged and or supported efforts to move to the Courts inclusive of the Court of Appeal and the Caribbean Court of Justice to deny the Chairman of GECOM of her authority to produce the elections results.

He said that the publications inferred that he wanted to remain in power without any regard or care of the consequences it would have on the country.

Moreover, Granger said that the publications would cause people to believe that he used invented irregularities to claim a victory for himself as President and the APNU/AFC at the national elections and that he consistently and dishonestly refused to accept the results of those elections.

Granger submitted that the publications would cause persons to believe that he permitted his Attorney General [Basil Williams, SC], to argue that the Recount Order was illegal, and along with his lawyers attempted to throw out the recount he agreed to abide by.

He submitted, too, that the articles would cause people to believe that he permitted Williams to argue that GECOM’s Chairman was obligated to accept the declaration made by Chief Elections Officer Keith Lowenfield.

As a result of the publication, Granger claims that he and his family have suffered and continue to suffer financial injury, constant grave distress, humiliation, embarrassment, indignity, pain, and suffering.

He contends that the “statements have no basis in fact, are malicious, grossly in accurate and intended to deceive the public” and damage his reputation and character.

“As a result of the said headlines and articles and its dissemination, online and offline [Granger’s] personal and professional reputation and standing has been irreparably and severely damaged, lowered in the estimation of right-thinking members of society and [Granger] has suffered and continues to suffer financial injury, constant distress, humiliation, embarrassment, indignity, pain, and suffering,” Forde said.

In the circumstances, Forde is asking the court to grant the orders prayed for along with substantial costs. He is also seeking injunctions restraining Nascimento and the three daily newspapers whether by themselves or servants and or agents from posting, printing, publishing, sharing, recording or otherwise recreating and disseminating the opinion pieces, most of which were letters to the editor.