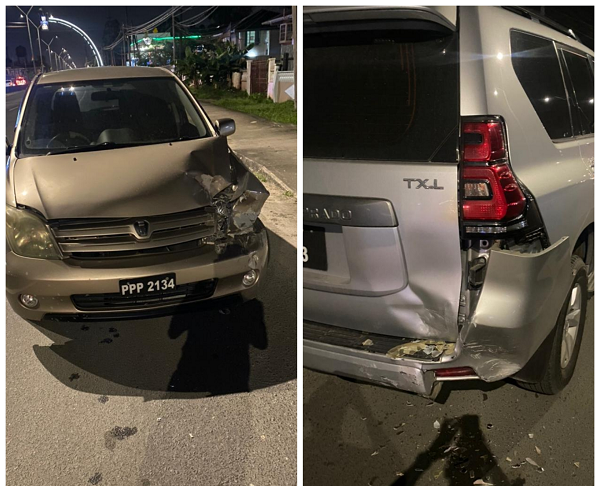 At left, the vehicle which was being driven by Dr. George Norton while the vehicle assigned to Rober Persaud is at right

Former Minister of Health and Culture Youth and Sport under the APNU administration, Dr. George Norton is being processed for court and will be charged with driving under the influence.

Just before 20:00hrs on Thursday night at Eccles, Dr. Norton who was driving motorcar PPP 2134 under the influence, lost control of the vehicle and slammed into a Landcruiser Prado which is attached to the Ministry of Foreign Affairs and assigned Foreign Secretary Robert Persaud, also a former Minister of government under the PPP/C.

We were informed that the state-issued vehicle to Robert Persaud was parked when the vehicle which is owned and driven by Dr. George Norton slammed into it.

The police visited the scene and escorted the drivers of both vehicle to the station where Dr. George Norton and Robert Persaud’s driver were tested for alcohol trace in their system.

He was told of intention to prosecute him and was then released on his own recognizance, (sent away without paying station bail)