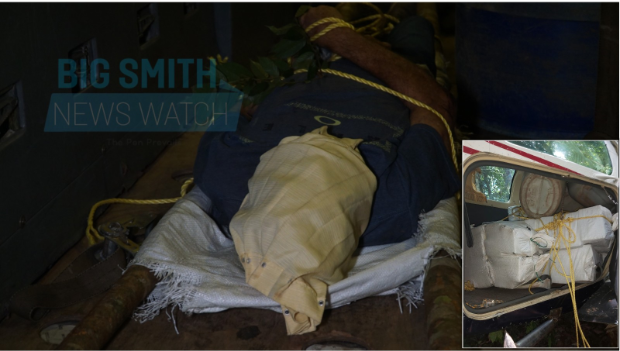 The body of the suspect in the cocaine smuggling operations in Region 7 that went wrong after the plane ferrying the illegal substance crashed at Issano in the Middle Mazaruni was brought to Georgetown on Monday evening.

Army Special Forces brought out the remains on one of its aircraft and it was handed over to the police who will be responsible for its safekeeping until the investigations are complete.

BIG Smith News Watch has been told that the cocaine which was found onboard the craft weighed approximately 390 Kilograms of cocaine.

Contacted for comment, Senior Law Enforcement operatives have confirmed that the assistance of Interpol will be sought in identifying the suspects who are presently in custody as well as determining the identity of the remains of the man who was found inside the beach craft when it was discovered with the cocaine.

From all indications according to one senior law enforcer, the operation in Region 7 was more of a rescue mission that went bad after alert villages reported to the police the presence of a suspected illegal aircraft on the runway.

The police are working with the theory that the plane which was found with the cocaine was indeed to land at the Issano Airstrip but the pilot encountered difficulties doing so and ended up crashing resulting in the porter of that plane being killed.

The pilot then communicated with elements from his point of origin and they scrambled a second craft, the 206 Cessna to execute a rescue operation of the pilot and to remove the illegal substance from the crashed plane but they were not able to locate it fast enough as it was among a clump of bushed several miles away from the actual runway where it went down.

When the men were arrested on Sunday night, the told police detectives that they were heading to Suriname and developed mechanical problems. The men also indicated that another plane that was flying with them might have crashed and its crew dead.

Yesterday around 12:05hrs ranks from the joint services were able to locate the crashed aircraft on the western end of the 9 Miles Airstrip at Issano in a clump of bushes, completely damaged.