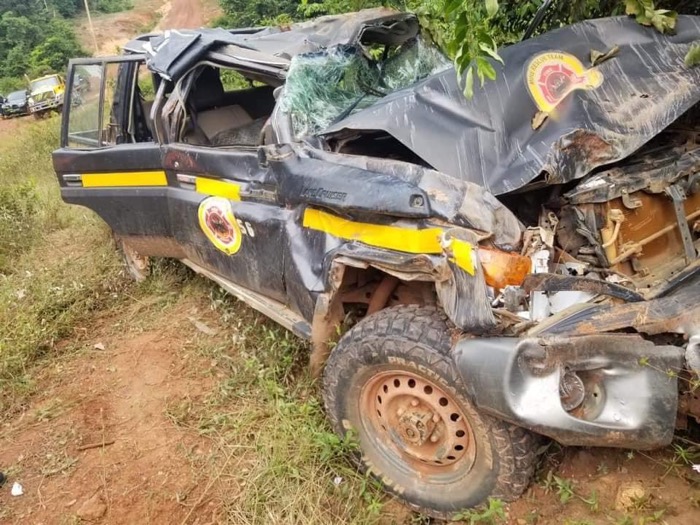 (FILE PHOTO) The wreckage from an accident at 49 KM road two weeks ago that claimed the life of a retired policeman.

Two weeks after retired Assistant Superintendent of Police Gordon Mansfield died in an accident at 49 KM Road, Buck Hall, another man lost his life along the same stretch of road on Monday evening.

Dead is Damion Culpepper (no address provided) who was an occupant in an open back pickup carrying  six person including the driver and a 3-Year- old boy when the vehicle crashed.

BIG Smith News Watch has been informed that between 20:30 and 21:00 hours Monday night at 49 KM Buck Hall Road, the Toyota Hilux GJJ 2153 toppled down a hill.

The vehicle was at the time being driven by Sulficar Boodhoo, a 24 years old of 139 Good Hope Village, Essequibo Coast, Region 2.

Information reaching this publication suggested that the driver was going around a turn down a hill and while going up another hill, dropped into a hole on the road and lost control causing the vehicle to topple down the hill.

The occupants were rushed to the Suddie Public Hospital where Culpepper was pronounced dead on arrival while the other occupants of the vehicle was treated for injuries sustained.