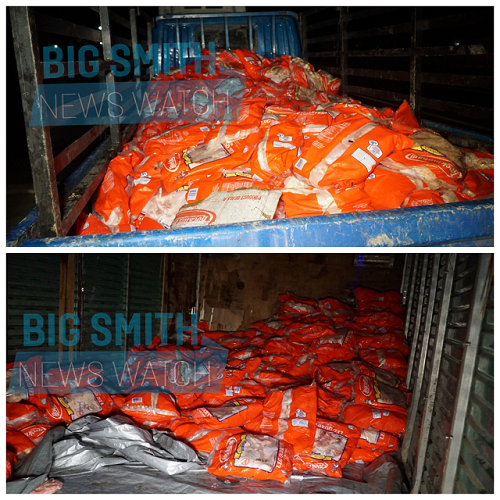 The smuggled chicken being transferred into a cold storage truck

The more than 700 boxes of smuggled chicken and the coil which took place earlier this evening at Farm Creek on the upper East Coast comes even as a truck belonging to the said businessman was busted on Monday night with a large quantity of chicken and coils also.

BIG Smith News Watch has been informed that following the operation on Monday which led t the bust of the smuggled chicken and coil, the GRA enforcement officers with support from a number of sister agencies combed the area along Farm Creek for most of today.

It was however after enforcement officers used a boat and entered the waters that the found tonight’s illegal items stashed among the bushes along the creek bank and covered with a tarpaulin.

The Guyana Revenue Authority is expected to issue a statement in relation to the operations last evening and tonight that saw the confiscation of the items.

This evening, the Guyana Revenue Authority along with support from the Guyana Defence Force were transferring the illegal chicken into a cold storage truck for preservation purposes.

Smuggled items such as chicken another eatables once seized by the GRA and found to be wholesome and fit for human consumption are generally distributed to the prisons and other state agencies that are required to provide meals for those within their care.