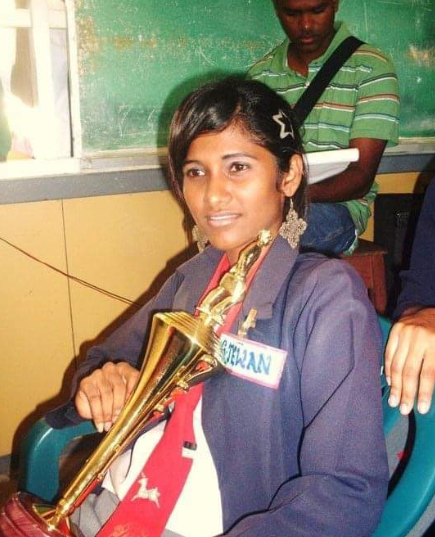 Believing in yourself takes courage when it seems like all the odds are stacked against you but coming from a background of institutional care there is way more effort and courage that is needed to ensure that your self-confidence never dies.

Thirty- Two-year-old Somwattie Jewan called ‘Sommie’ who spent most of her childhood in the Canaan Childrens’ Home at Port Mourant, Corentyne Berbice is a living testimony and example of self-courage and confidence.

In 1997, two years after being separated from their father, Sommie’s mother moved her and three other siblings to Berbice. At the time she was just nine years old. Her mother who by that time was single and had four children to take care of did not enjoy the luxury of relative opening their doors to her and the four children so the decision to place the children in an orphanage was the only option at the time.

‘Sommie’ said her mother’s decision was not a lone ranger one as she explained that her uncle who was very active in the church at the time also encouraged her that the decision was the right one to make given the circumstances.

Today, ‘Sommie’ who went to school for the first time at age 11, is now a nursing student living in the United States of America.

“I clearly remember entering the compound of Port Mourant Primary with excitement to finally be able to experience the things other children my age were experiencing. However, starting school at 11 years old was very challenging. Firstly, I lack the foundation of 7 years of schooling so technically I had to learn my ABCs and counting plus the other complicated necessity that my age group was to be familiar with. Fortunately, the orphanage was blessed with great leaders who took the role on as a teacher and basically thought me everything from scratch.” Somwattie Jewan told BIG Smith News Watch

At the time of ‘Sommie’ residency at the orphanage, Mr. Cyril Drepaul was one of the directors and someone who helped ‘Sommie’ catch up with other students within one year by constantly teaching and helping her understand the basic concepts and contents that she would have missed in her earlier years.

Somwattie Jewan would soon realise that she was not an average child and that came to reality when she wrote what was then referred to as Common Entrance Exam (Now National Grade Six Assessment) one year after and was able to cop a place at the Corentyne Comprehensive High School.

“I am and will always be grateful for Mr. Drepaul’s teaching and religious guidance in life. He and his wife molded me into the woman I am today. When I started High School my life changed in several ways because by now I’m gaining self-independence and perspectives in regards to my future. I wrote CXC and graduated with 11 subjects and then started teaching right after.”

The joys and excitement of attaining eleven passes at CXC were followed by sorry and grief, Somwattie Jewan would receive the news that her mother has died. This indeed had a toll on her as she was also now literally getting the handle of living on her own having reached the age requirement which saw the orphanage sending you off after the completion of your secondary education.

But as faith would have it Mr. Drepaul and his wife adopt Jewan and treated her as their own. With encouragement from the couple, Somwattie Jewan started studies at the Cyril Potter College of Education one year later and subsequently graduated in 2011. A year later, she got married and moved to the USA and surely realised that for her.. it was not for ‘better for worst’

“Marriage did not work out but I was so grateful for the experience and my now 8-year-old son. After my divorce in 2017, I enrolled in school and entered the Nursing program. Which for me is the most rewarding thing I have ever done in life. Thankfully, I will be graduating in a few months.” She told BIG Smith News Watch.

Asked whether she had any regrets about her upbringing, Jewan quickly made it clear … “I do not” She disclosed that everything that happened in her life has thought her a lesson, fashioned and positioned her to become the young lady she is today. According to her, she is grateful for the challenges faced thus far as they all served to build her emotionally and psychologically.

“I was bullied often times throughout my childhood and adult life, I was cursed by people I crossed paths with about being an orphan. Obviously, these people were financially better off than me but my advice to other youths going through this is to see this as just another hoop you have to jump through to get to your destination.” Somwattie explained to this publication.

The 32 years old related that there will always be people in life who will have that look of satisfaction to see you fall and when you do fall they will willingly kick you down further to see that you do not get up but she wants to let those in similar circumstances to know that their confidence in who they want to be and what they want for themselves should be greater than the strength of their haters.

Clearly, it was courage that made Jewan put in the hard work to get those aforementioned pearls, something she continues to do. As a nursing student, she has continually met the challenges the program presents.

The little girl from the Guyanese orphanage lives within her still, yearning to excel. As the author, Tara Westover observed, “I don’t think education is so much about making a living, it’s about making a person…Courage made me a person.” Somwattie Jewan ended her interview with us by saying.